This IS Kalapuyan Land opened in 2019 as a physical museum exhibition by Guest Curator Steph Littlebird Fogel (Grand Ronde, Kalapuya) and became an online exhibition in 2020. Fogel annotated panels from the museum’s prior exhibit on Kalapuyan peoples, curated contemporary Native artwork into the exhibition, and added historical content from David G. Lewis, PhD (Chinook, Santiam, Takelma, Grand Ronde). The exhibition prompts critical thinking around representation of Indigenous history and identity in non-Indigenous institutions.

In 2020 Five Oaks Museum founded a project to create exhibits as signs that could be placed in outdoor locations based on images in the This Is Kalapuyan Land exhibit. In late 2020 an advisory committee was formed to begin a project to bring the exhibit to OSU with some added unique signs. At least seven copies of the exhibit with be displayed through the campus and in nearby OSU forestlands.

Why this project now?

OSU has undergone a number of changes in Native programming in the last few years. There is now a regular Kalapuya Homelands acknowledgment message that is using in university departments and is the opening for many meetings and events. Students have a great interest in understanding Native history and context and the exhibit brings relevant exhibit content in an easily accessible format to the university.

Accommodations for disabilities may be made by contacting Luhui Whitebear at: [email protected] or 541-737-9036. 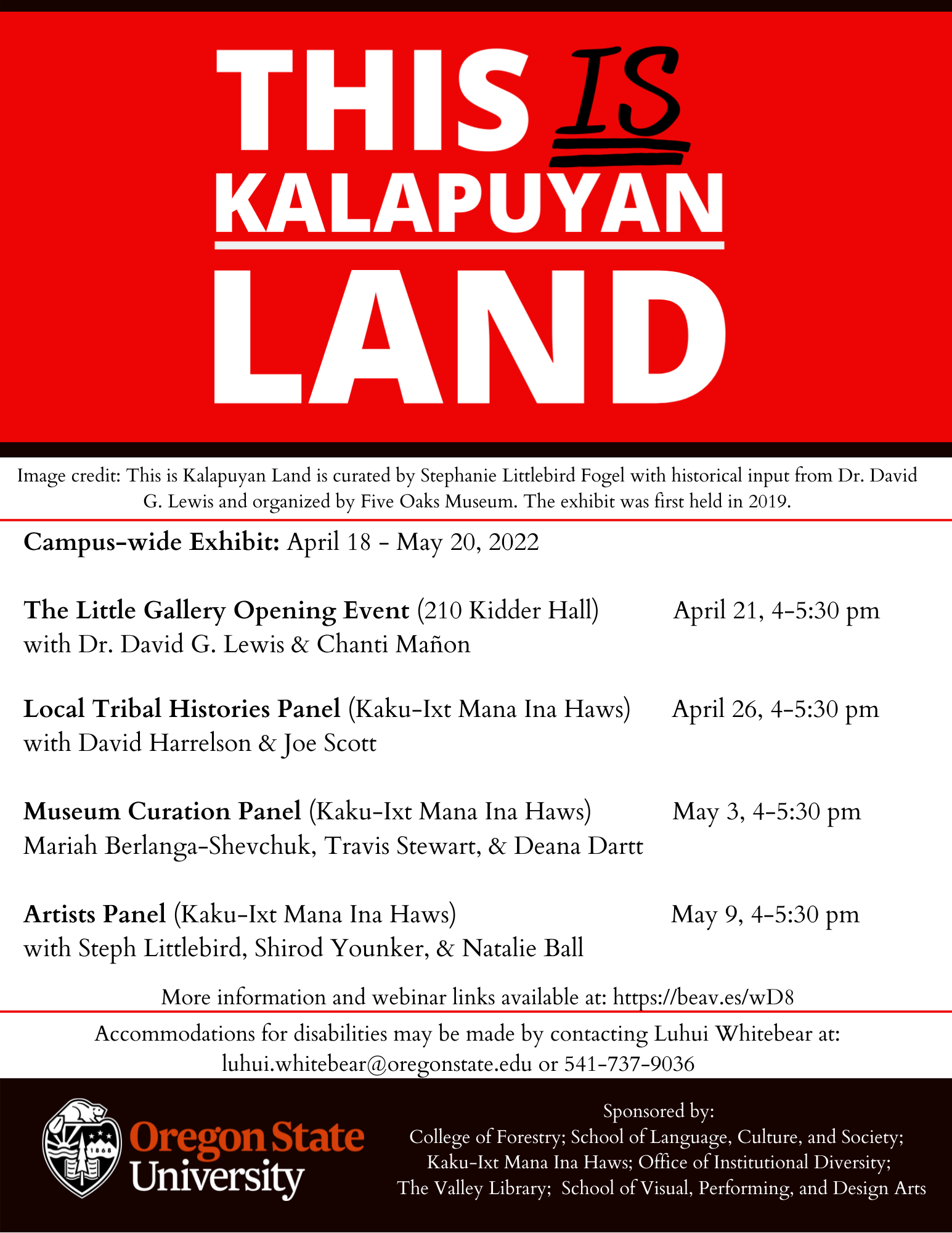 The Hartless sign was the first planned to be added to the project because Hartless is known to have been one of the “pinefu” tribe, his people having first lived in Corvallis and he was the last speaker of Champinefu Kalapuya language. He was interviewed by anthropologists while on the Grand Ronde Reservation in the late 19th and early 20th centuries and told several oral histories in his language which were subsequently translated by John Hudson, a Santiam Kalapuya man from Grand Ronde as well. His oral histories are published in Kalapuyan Texts in 1945 by Melville Jacobs. Hartless’ story of being the last Kalapuyan from his band, the “pinefu,” is a poignant local statement about the federal policy of removal and assimilation of Native tribes across the United States, and of language loss, a significant epidemic for Indigenous peoples worldwide.

The Young sign emphasizes the strength and resilience of a Kalapuyan woman, who lived through the early phases of colonization and settlement of the Oregon Territory from at least the last 1830s to 1922. First records of Eliza have her taken in as a young woman at the Jacob C. Spores homestead near Eugene, Oregon in the 1840s. She likely learns the skills for how to help a farmwife in settler Oregon as it was very common for young native children to be taken in and made to help with the chores around the farms.  She has two husbands in her life, and is poorly treated by the first and then escapes to Live with Jim Young at Brownsville. The couple live most of their lives at Brownsville, with a brief time spent at the Grand Ronde Indian reservation, they return to Brownsville and Jim dies by getting in a fight. Both of their children also die at an early age and are buried at Brownsville.

Eliza lived several decades after Jim and served the town of Brownsville by doing odd jobs, laundry, cooking and cleaning. She is well liked by the townsfolk and his given a small shack to live in. When she is elderly its noted that she goes blind but continues practicing her traditional art of basket weaving. She was an avid weaver and there are numerous baskets and purses in museum collections made by her. She dies in 1922, but her legend is expounded upon in numerous newspaper accounts in later years. Some accounts suggest she lived well past 100 years of age but this is likely not true due to the historic notes that she was a young person at the time she came to live with the Spores family in the 1840s. Some newspaper accounts also suggested that she was the “Last of the Kalapuya” an erroneous title, due to the fact there were several hundred Kalapuyans living at the Grand Ronde and Siletz reservations at the time of her death.

She is a rare example of a native person who lived off the reservation most of her life, when it was Federal policy that all natives - them not being U.S. citizens until 1924 - should live on the Indian reservations. Native people who proved useful to communities sometimes would be allowed to remain in town.

Camas is a significant food plant for the Kalapuyans of the Willamette Valley. Kalapuyans called camas t’ip (Camas) or ant’ip (the camas). All tribes in the region had camas, but the Willamette Valley has ideal climate conditions, great soils, plenty of sunlight, plenty of water to host vast quantities of camas. The Kalapuyans had vast prairies full of camas that they would dig for several weeks in the summer months. The camas was then baked at the Camas camp, in pit ovens and after several days in the ground and fully caramelized, would be stored for winter use. If there were significant quantities gathered from the summer, “camas wheels” – cooked camas smashed together in a packet- would be traded to other tribes for salmon or other trade goods. The great prairies of camas are mostly gone now but in areas it has been preserved, camas will erupt in a great purple-blue sea from April through May, at fields that have not been disturbed, and in June will go to seed. By July when the seeds have been cast away, the camas is ready to harvest. Kalapuyans used digging sticks made of iron wood and an antler handle to leverage up the soil so to gather the camas bulbs.

There are two major varieties of camas, Camassia Quamash (Common Camas) and Camassia leichtlinii (Great Camas), that are very common in the Willamette Valley. Camas colors runs from white, to light blue, to deep purple and there are even red varieties. There is a white flowering plant called death camas as well in the valley, it is not a camas, but blooms at the same time and looks similar to camas but is poisonous. The best rule when gathering is to avoid all camas with white flowers.

Members of the committee who are deans and directors were especially interested to follow up the exhibit with learning opportunities for students and faculty with a parallel series of panel discussions and presentations related to native art and indigenous land acknowledgments and the history of the tribes. These panel discussions were conducted in May 2021.

The Kalapuyans originally occupied over a million acres in the Willamette and the Umpqua valleys. They have lived here for over 14,000 years and have endured enormous changes to their traditional life-ways during the past 200 years. The Kalapuyan peoples created the amazing fecundity of the Willamette Valley by annually setting fires in the valley, and in so doing cleared the land of excess vegetation, renewed food plants, and deposited nutrients in the soil, as well as other benefits. They were a stable society who harvested the fruits and vegetables of the valley, and hunted and fished the terrestrial and aquatic animals to provide their primary food sources.

[Narrative borrowed from the Quartux Journal and edited by David G. Lewis]

Links to websites and sources of information